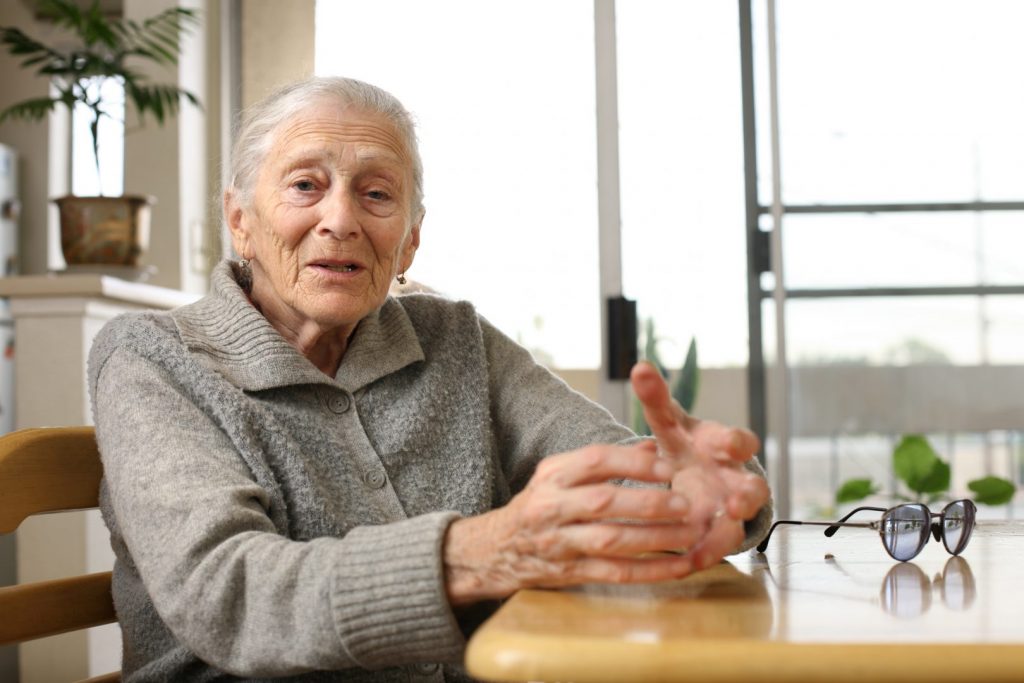 This older woman sits at home in her living room as she engages the camera and all of us on this side of the lens with a hopeful outlook on her life as she ages in place.

Aging is one of those concepts and terms that few people like to mention or discuss. Who wants to get older except maybe a child or someone waiting to attain a certain threshold age to qualify for certain benefits? Nevertheless, aging happens to all of us – inanimate objects also age such as our cars, homes, possessions, neighborhoods, and everything else we can think of or see.

That said, why the big aversion to discussing, mentioning, or thinking about getting older or aging? Part of it might have to do with considering our mortality and the feeling of potential or eventual declining physical abilities. We would rather not be reminded of the fact that life is moving on.

Youth and youthful products abound. Look at all of the infomercials on television that show this celebrity or that one touting their age formula skin products or wrinkle reducing creams. There are numerous articles and advice posts on how to remain acting, thinking, and looking young. We seem to think that there is something wrong or weak in admitting our age or in acting it.

Remember as children when our parents would admonish to act our age when they thought we were being childish or immature? The same advice holds today, but few people really want to act their age. Younger ones want to act older to get a better job or more responsibility. Older ones want to downplay it to seem more vital and in-tune with current events.

As the aging in place movement has taken off and began building momentum over the past two decades, the word aging and the whole concept of aging in place has gone from something tolerated but not really discussed to something openly embraced. Now, we want to discuss and experience aging in place. It’s a good thing.

Nevertheless, changing the terms we use to describe the aging process does not change the reality. It may make us feel better about it and allow it to seem less impactful, but it appears that we are mostly past this reticence and are ready to discuss aging and aging in place openly – especially with the average life expectancy increasing and the thoughts of attaining centenarian status a real goal of many people. There even is a term for reaching one-hundred ten or more years of age – super-centenarian.

The Baby Boomer generation may be at the heart of this. This generation was responsible for so much social change during their lifetime – largely indirectly because for much of their lives they were too young to be responsible for it. Little League baseball and other youth activities were formed to appeal o the Boomer market. Schools expanded. College enrollments soared. The demand for housing was quite strong. Employment reached all-time levels and remained high because Boomers did not – and still haven’t to any large degree – taken traditional retirement.

The term active adult is frequently used in housing developments, community activities, and similar areas that attract the fifty-five and older crowd. Senior discounts and AARP memberships – possibly frowned upon or thought to be never be something that would be necessary or desired are now used more and more by the Boomers.

While getting older may not be something that we like to have happen – especially when we think back twenty or thirty years to how we used to be more active and have fewer aches and pains – we understand that it is necessary. Therefore, we openly embrace it. There is nothing sinister about getting older. Aging is a fact of life. Let’s discuss it and make it a part of how we approach the remainder of our lives. Similarly, aging in place is part of this same mindset.

We don’t need to soften or sugarcoat how we talk about aging. We just need effective approaches for working it for ourselves as we are getting older and for loved ones, friends, clients, neighbors, and others that we know who may be older than us. This is a fantastic time to be an aging in place specialist, and yes, aging is part of our title.