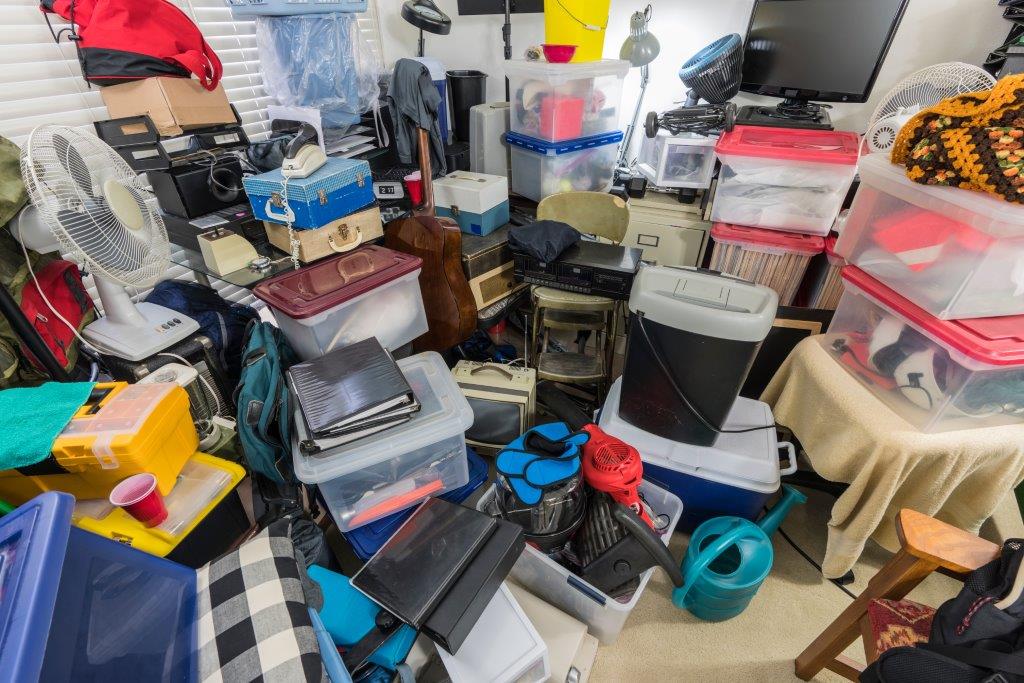 A roomful of stuff, often more than one room or closet, seems overwhelming to us when we decide to tackle it so we usually try to ignore it in the short-run, but we can change our approach to it.

There are many articles written about the need for, as well as how to go about, decluttering our living spaces, especially as we get older. We have many places where we store our stuff – basements, attics, closets, dressers, cabinets, garages, backyard storage sheds, and even storage spaces off-site that we rent. As a matter of fact, one of the fastest-growing industries in recent years has been the mini storage facility because people are finding it too hard to retain all of their treasures in their home, or they have downsized or live in an apartment or condominium that just doesn’t have the storage space.

This should tell us something – that we as a whole are retaining way too many items. However, none of us like to hear this so let’s save that for a little bit later. Let’s look at what’s really going on.

We have people who over the course of their lifetimes, and this includes all of us to one extent or another, have retained items that are important to them, items that link to their past or portray a sense of history. They denote some happy points in their lifetime or allow them to relive important milestones or memories. We have ticket stubs from plays or sporting events that we attended, playbills and programs, photographs that we’ve taken with important personages or with family members (celebrating a graduation, anniversary, birthday, an award, the first-place achievement in a contest or other noteworthy events), pennants, T-shirts, CDs, and other items that we’ve purchased at concerts and other venues, and we have the normal carryover from just living our lives.

We have appliances that are broken or no longer work that we paid a lot of money for at the time so we don’t have the heart to throw them away. We keep them thinking that at some point we might fix them or someone else might want an appliance that is not quite working but they can fix it. Maybe we think that day we’ll get around to fixing it, but that was then and the reality of now is that it’s not likely to happen. When we are repairing or installing something around the home and we need an extra screw, bolt, or handle, we go to the hardware store or home improvement center and we purchase a package of them and generally get more than we need to do the job. We keep the extra ones in a drawer, jar, or box. We have camera equipment that is obsolete because we don’t use film anymore. With digital cameras and especially cell phones, film cameras are not something that most people need.

Those of us who have ever attempted to thin out some of the stuff we have kept over the years know what a daunting task it is and that after a little while we lose patience, grow weary, and put most of it back where it was – leaving it for another day. When outsiders come in to help us, their first observation might be that we have too much stuff. We know that and don’t need to be reminded of it.

The issue is that too many of us try to tackle the whole job at once and feel frustrated or partially defeated at the outset. How about if we don’t attempt to do everything at one time? We break it up into stages. It doesn’t need to be done all at once, and this is a concept that many of us miss and one which can add new enthusiasm to this process. When we know that we don’t have to get it all done at once and that it’s even encouraged that we not tackle it all at once, it gives us a great deal of freedom and relief to know that there’s nothing wrong with us and that we are approaching the process correctly.

We should set reasonable expectations so that in a day’s period of time, or a longer period that works for us, we will have looked at so much stuff and decided to retain most of it. We may discard the real junk or the broken items, but it gets harder on the important items.

Therefore, in the short term, we should adopt the position is to keep everything except those items that definitely are no longer needed. If there’s any question, it goes into the keep pile. The next time we do this we can be a little harsher and decisive on what we keep or retain. The more times we do this the more we will have whittled down what we keep.

Let’s just remember that we’re under no specific time limit to get everything sorted through but the quicker we can do it the better we’ll be and the more organized our living space will be as well.