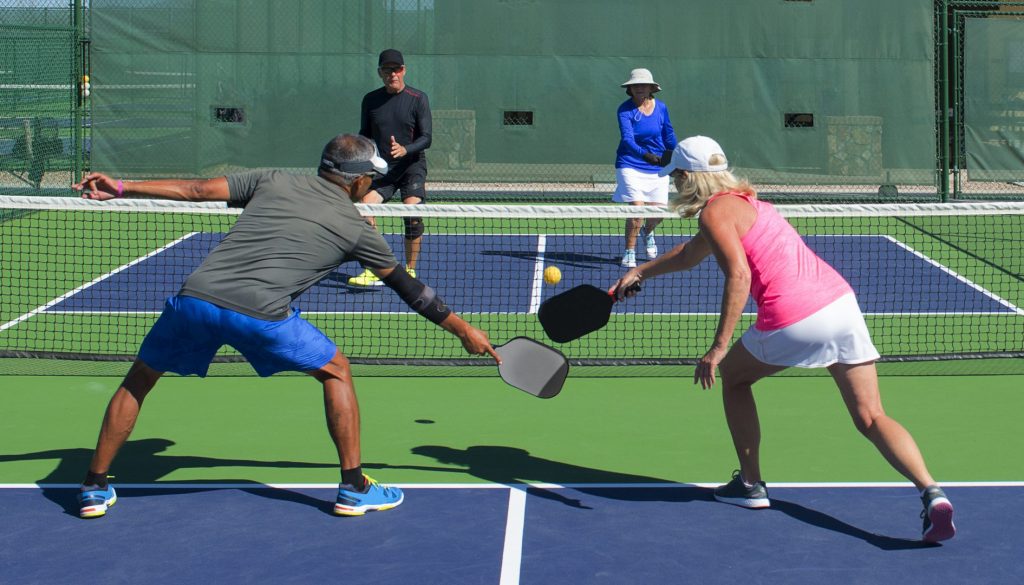 Many American sports have been created because someone found a use for something that could turn an ordinary activity into a game. Basketball, for instance, was born out of taking peach baskets – originally still intact with the bottoms still in them – nailing them to a tree or post and then throwing a ball into them. How many of us aim for the wastebasket with a crumpled ball of paper or piece of trash?

The most recent activity, although it may be surprising that this occurred over a half-century ago, was the creation of a simple, low-impact, visitable, backyard activity which became known as pickleball. Many of us as parents have created activities for our children to do out of items we had on hand. Such was the origin of pickelball.

In 1965, on Bainbridge Island in Washington State,  Joel Pritchard and his friend Bill Bell wanted to have an activity for the family to do and they thought of badminton, but there wasn’t a full set of equipment available to play it. Necessity being the mother of invention as the saying goes, they looked around to see what else they could come up with that could be used for a makeshift game of some type.

They took ping pong paddles, a whiffle ball, a badminton net, and the game was born. They were said to have “pickled together” (some people might be familiar with a similar phrase of “cobbled together”) the items necessary to play. This just means that they took what was on hand that seemed like it would work and went with it. As youth leaders, teachers, or parents, many of us have done the same thing on rainy days, camping trips, outings, and at other times when we wanted to occupy the kids with a fun activity by using what we could find at the moment and turning it into something they could play.

While suitable for any age, the game has really taken off with adults, notably the seniors. It is now considered to be a premier senior athletic activity. Even home builders and community planners are including pickleball courts – outdoors and indoors – into their open space or indoor community center plans.

The game, for the past quarter-century, has been adopted and played in all fifty states. It is played in every province in Canada and many other countries as well. There now is an official wheelchair version of the game that is played. It is a seniors activity to be sure, but not exclusively.

The game has similarities to many other sports – badminton, ping pong (table tennis), tennis, volleyball, and racquetball – but its low impact on the players is a major attraction. The ball – the whiffle ball – is hit by a player on one side of the net, after it bounces once, to the other side of the net where it is supposed to be returned over the net by the opposing player after the ball bounces once. After that, it can be returned either on the bounce or the fly (called a volley). Unlike volleyball, badminton, or tennis, there is not the hectic running after shots because the ball doesn’t travel as fast or go as far. Plus there is time to get to it and play it off the bounce, or on the fly if it is in a certain part of the court considered to be the allowable volley area.

While the game was originally created and played in the backyard on grass, most courts today – badminton size – are hard surface outdoor courts or wooden or concrete indoor surfaces. There is nothing preventing the game from being played on grass, but it is more visitable (meaning that people can get to the playing surface and move about on it), permits more people to be able to participate, and allows the ball to bounce more if the surface is firm. Typically, no more than two players per side (doubles or mixed doubles) participate.

Wondering if the creators of this pastime, just looking for something for the family to do on that afternoon over a half-century ago, knew the impact they would have on the sports landscape in this country and around the world. Likely not, but look at how it has grown.

The great thing about this activity – sport if we like – is that it takes no experience, no particular athletic ability, and no expensive equipment to be able to participate. Of course, serious players can get their own racquets to suit their needs, but like visiting a bowling center, the bowling balls that are provided there will knock the pins down just the same as an expensive custom-fit one. It’s a a matter of personal preference and how serious one wants to be about this activity froma casual player to an all-in participant.