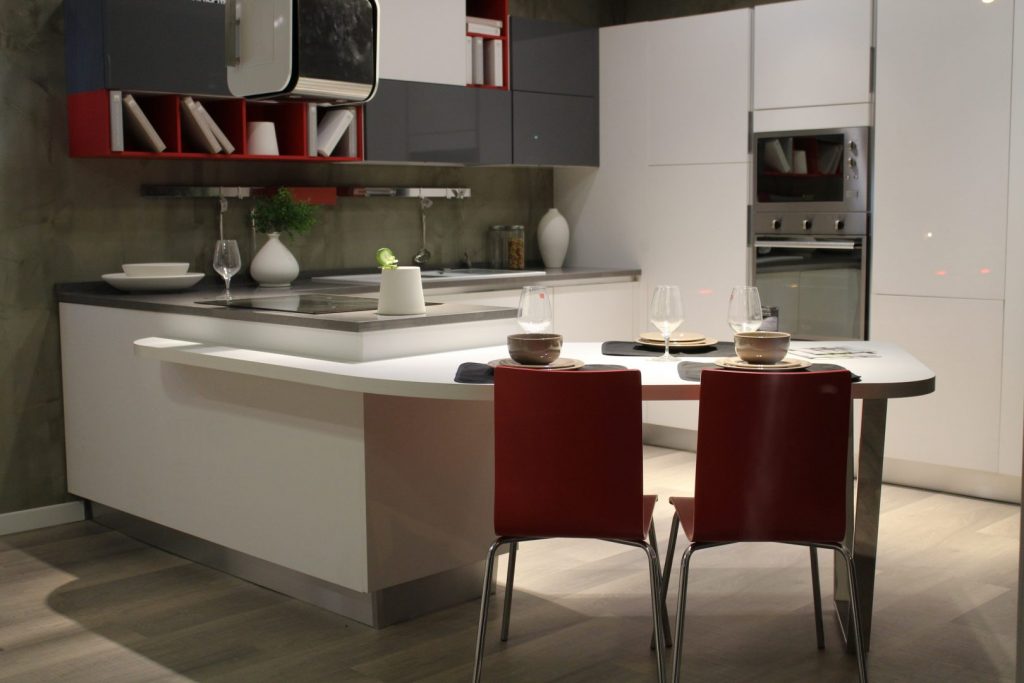 A dropped or lowered eating counter at the thirty-inch height, in addition to the traditional thrity-six inch counter, allows much flexibility in seating and food preparation and meets multiple needs

True universal design is inclusive. It accommodates as many people as are reasonably possible – regardless of whom might be present most of the time or for whom the design is intended. Anyone who has any degree of independence, no matter how limited that might be or what they might depend upon for assistance, comes under the general framework of universal design – and we need to accommodate them.

Someone may not walk very well, or they might require assistance to move or to ambulate. They may not be able to move about without help in the form of a walker, wheelchair, crutches, service animal, or caregiver. Still, universal design applies to them, too.

Someone may have limited vision or reach. Their range of motion may be restricted. They might be of a slight build or short in stature. No matter, universal design can accommodate them also.

The point is that most anyone can benefit from universal design – again, not so much in the design but in the application. Still, a universal design strategy or universal design creations should create solutions that blend into the surrounding environment and not call attention to itself or themselves. It might be a functional solution, but we can still add a measure of attractiveness to the design. Nevertheless, function is king – usable by everyone.

Our focus must be on creating the application for universal usage. Then we can work on the visual appeal or aesthetics of the design. Function is first. Then comes form.

Sometimes, the design will just go with the form. For instance, a thirty-six-inch door width (interior or exterior) or larger is universal. It doesn’t have to look like anything but just an attractive door that someone would like to have in their home. If it is too large for the room or hallway where it is located – in width or height, or the ceiling is unusually low in relation to the size of the room, or the width or height of the door, it may look out-of-place and call attention to itself as a seemingly too large for where it is. Nevertheless, the thirty-six-inch door width (or even wider) is the correct call for optimal access and use as the passageway. If it is ornate or decorative more than similar doors one might see, it could receive notice and comment, but on its appearance rather than the width of the design.

Rocker light switches (also known by their brand name of Decora) are becoming quite common in homes. There still are some toggle switches in use, but the rocker switches are taking over as the norm. These switches are classic universal design – low physical effort, sized appropriately for where they are installed, and with a high tolerance for error in that they don’t have to be used in any prescribed way and in fact can be operated in multiple ways.

There are many applications that can be used in the home to increase accessibility or function. Often, a universal design approach is desirable or appropriate to create a solution that will apply to more than just one person. In fact, the more people that can use a design successfully or effectively, the better the job we will have done in creating it. This is how universal design translates to market appeal.

Often, we will need an application for an aging in place issue where we will need to address the needs of a specific individual. We can do that, but we can also take a step back and look at ways that a grander solution might be achieved that would be more universal rather than specific.

We can create client-specific solutions, or we can look for ways to make that solution more visually appealing and less obtrusive visually so that it doesn’t stand out as anything special but simply meets the needs of the client. A sit-down area in the kitchen or bath that looks like it is supposed to be there, chair rail in the hallway or other rooms that is decorative while functional, more lighting, easier transitions between rooms, and similar concepts will meet the needs of the person requiring them but can also be considered as universal design because they apply to a much wider audience.

This is the thought behind trying to create designs that are more universal in nature rather than just a design to solve an issue. The more aesthetically pleasing we can make it while retaining its function, the more we can think of how multiple people might use the same space well, the way a space might accommodate a variety of needs, and keeping in mind visual changes in terms of contrast and depth perception will allow us to create designs that work on a large scale and follow the guidelines of universal design.