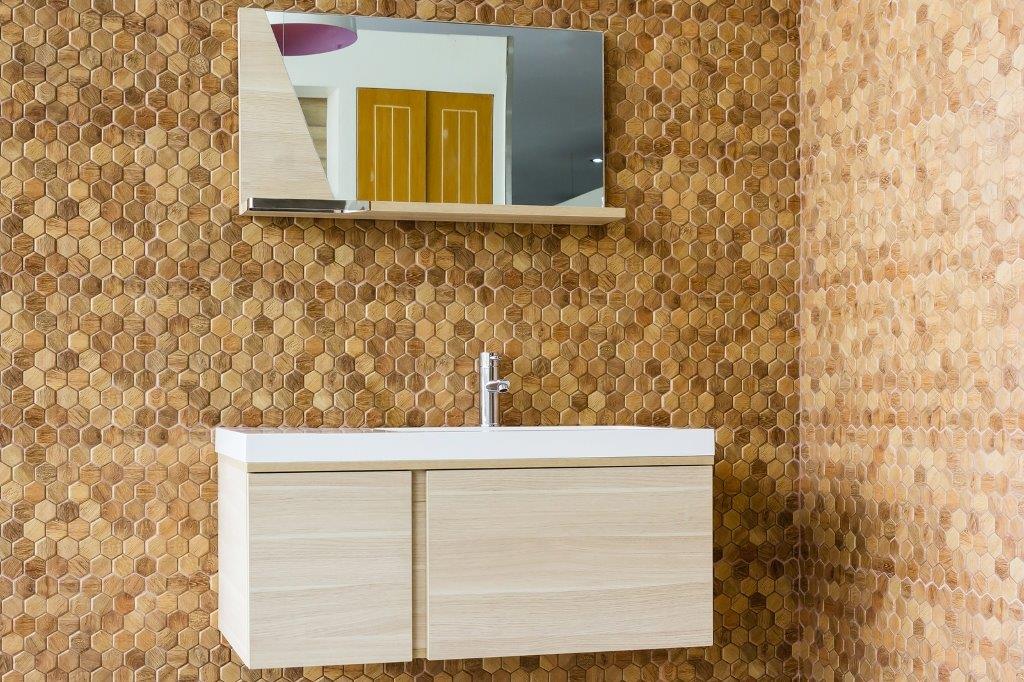 This bathroom mirror fails to provide universal access because it is not located where anyone can use it except those rather tall – how large it is and how high from the floor are a function of how well it can be used.

Universal design, as most of us know, is a set of seven criteria, guidelines, parameters, or principles created in 1997 by the Center for Universal Design at North Carolina State University. Those 7 concepts describe how something should work, look, operate, or act for the user. When it does, we can deem that it is a universal design feature, and we are thrilled to label it as such. However, there are many pretenders that think they are universally designed when they come up short in at least one of the seven guidelines.

Nevertheless, many people have come along with an attempt to make the formula better. After all, we sometimes think we can improve upon a concept or that our experience gives us an inside track for defining what needs to happen.

Various people have their own take on what they label as universal design features and provide a series of pronouncements or standards that are not and were never part of the original principles. For instance, nowhere are any dimensions ever mentioned in the description and discussion of the seven principles. An object for features needs to be accessible and easily reached and used, but nothing states that it should be or must be so many inches from the floor, so far from a corner, so high or so low, or so anything. If an item meets the seven guidelines, it can at a height, location, or dimension that otherwise fulfills the desires of the homeowner.

Maybe, they are confusing their desires with ADA guidelines which do specify dimensions for locating light switches, outlets, toilets, and other objects.

Still, suggesting that something be installed or located in a certain way or location is not part of the universal design guidelines. Additionally, as they are differing opinions, based on personal preference or professional experience, as to how something should be installed, it’s fine to state this as the case but not to make it a presumed standard. For example, many people like a so-called comfort height toilet, but this is not advantageous or even recommended for many people. Therefore, advocating this as something that all homes should have to include a universal design approach in the bath is misleading. This well could be an aging in place solution that is recommended for a particular client, but it cannot be construed to be a universal design feature because, quite simply, it isn’t.

One principle of universal design is that a product needs to be intuitive or offer perceptible information, meaning that just by looking at it we can determine what it’s supposed to do, how it’s supposed to be used or held, and what we need to do to operate it. It doesn’t need to be located any particular distance from an adjacent feature, so high, or so low against another feature, or allow the range of action of that object to depress a certain distance to activate it.

Nowhere is a dimension called for, mentioned, suggested, or inferrd. The principle just states that the product or feature should be intuitive or perceptible so that we can figure out by looking at how it might work and from where it’s located how it might be used. For instance, a faucet in the hallway or the bedroom would not make sense. Therefore, there’s no intuitive merit in having them here. We would expect to see a faucet in the kitchen or a bath, and part of the intuition or perceptible information about using it is gained from where it’s located in the home.

We certainly want a universal design feature to be usable by everyone. That’s why we label it as such. By pronouncing or including a secondary non-written standard that an object be so high from the floor as in a toilet height or so low from a conventional height as in a lowered countertop might make sense to the end user but should not be confused as creating a universal design product. The function is the key. If it works for everyone where its located, then the actual dimensions used are less important. Function counts.

An item might be accessible, desirable, and generally beneficial, but it wouldn’t be considered as universal unless anyone could use it without straining or without exerting themselves – small or large, standing or seated, low vision or full vision, robust physical ability or more limited, or any other trait or characteristic. Low physical effort is another one of the seven premises of universal design that needs to apply and be taken into consideration in equipping a space.

Let’s just remember to look at what something can do and how it’s designed. Just because it works for us, or the majority of people we can think of, doesn’t necessarily mean that it will work for everyone in the same way. While the higher toilet has merit for taller individuals and those with less flexibility in their backs and hips, it may be too tall (as in unsafe to use) for smaller individuals. This is the risk we face when declaring that certain features or dimensions define universal design when clearly they don’t.

If a person can be eliminated from the effective use of a design because of their stature or abilities, it can’t be declared universal no matter how much we might want it to be.