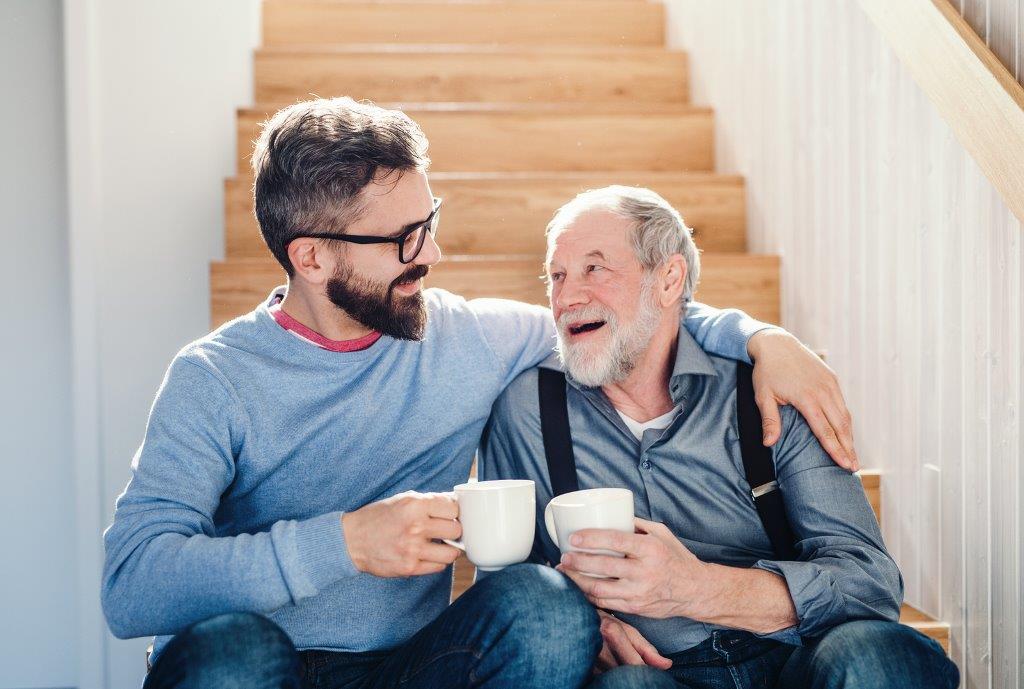 A father and son pause on the steps to enjoy a cup of coffee. a laugh, and each other’s company – aging at whatever the number has its memorable moments

All of us are getting older .it’s a fact of life .not just us but the trees around us the rocks and anything else that lasts longer than a season. Getting older when we are young seems exciting. We can’t wait for that next birthday because that signals new opportunities. Sometimes it enables us to participate in activities that were prohibited before attainment of that age. At some point in our progression through life, we realize that we are considerably older than we were just a short while ago. That can be troubling for people who want to remain forever young, or it can be an incidental observation.

some people are afraid of getting older, and some have almost a phobia about getting older or aging .nevertheless if we strive for a long life aging is part of it we can’t have one without the other . all of the nice-sounding adjectives that we can employ for aging such as seasoned active adult mature or other labels may make us feel better but are unnecessary they don’t hide the basic truth that way you’re getting older. And there certainly is no shame in getting older. actually the opposite is true. We should take a measure of satisfaction and pleasure in the fact that we have been able to live as long as we have and experience as much as we have, even if we’ve had many challenges along the way.

No one is guaranteed a certain lifespan, and obituaries (and cemeteries) are full of people that appear to have died way too early so we need to embrace what we have and enjoy life. Aging, and more specifically, aging in place, allows us to do that.

While some people may feel it necessary to soften the fact that they are getting older and to almost hide from it, others embrace it and show that this natural occurrence is not affecting them. Denying aging really is unnecessary and maybe psychologically unhealthy. It’s been said we’re only as old as we feel, and while that can be true, there’s no point in looking or acting many years younger than our actual age. We’ve earned the badges of age.

There are people who suggest that we need to find other adjectives for aging whatever those might be to soften this phenomenon and make it less harsh for use to endure. However, this seems like a lot of effort to go through when aging is perfectly fine and something to be proud of experiencing. Why relabel the aging process of the attainment of advancing years when it’s not necessary to do so? While calling the aging process or getting older something that sounds “nicer“ may be easier for some people to accept, It does not change reality. Everyone is a day older today than yesterday, and some have many of those yesterdays behind them as well as many tomorrows hopefully to look forward to arriving.

Just as we did when we were children and we looked forward to that next birthday to begin grade school, play youth sports like Little League or join Scouts, to be able to go on an amusement ride unattended, to stay up later at night (especially on non-school nights), to be at home without a babysitter, to get our drivers license (and then our first car), to register to vote, to start college, to get our first apartment, to qualify for better car insurance rates, to run for elected office if that was something we desired to do, and ultimately to receive senior discounts or qualify for Medicare, aging is something that not only happens but something that we should embrace. Literally, where would we be without it?

While remaining young might seem desirable (at least temporarily or for certain instances) – and certainly a younger outlook on life and the ability to do many of the physical activities that we could at younger ages is nice to remember – getting older has its benefits as well.

As we get older, we tend to worry less about pleasing everyone all the time, what people will think of what we are wearing, or trying to fit if we don’t feel like it – not that we need to go out of our way to be ornery or contrary. It’s that age has certain benefits such as being more comfortable in ourselves and not being so concerned about what everyone else is thinking of what we are doing. We get to be occasionally forgetful as well. If we want to take a nap in the afternoon or go to bed early, no one seems to mind.

Let’s leave the idea of getting older alone and just call it what it is – aging. Everyone understands this term, and creating a nicer sounding word – if we are able to do so – doesn’t really change anything except maybe how we feel about getting older. However, we can have a good attitude about that without relabeling it so let’s save ourselves the time of trying to invent a new word or term for what everyone is experiencing.