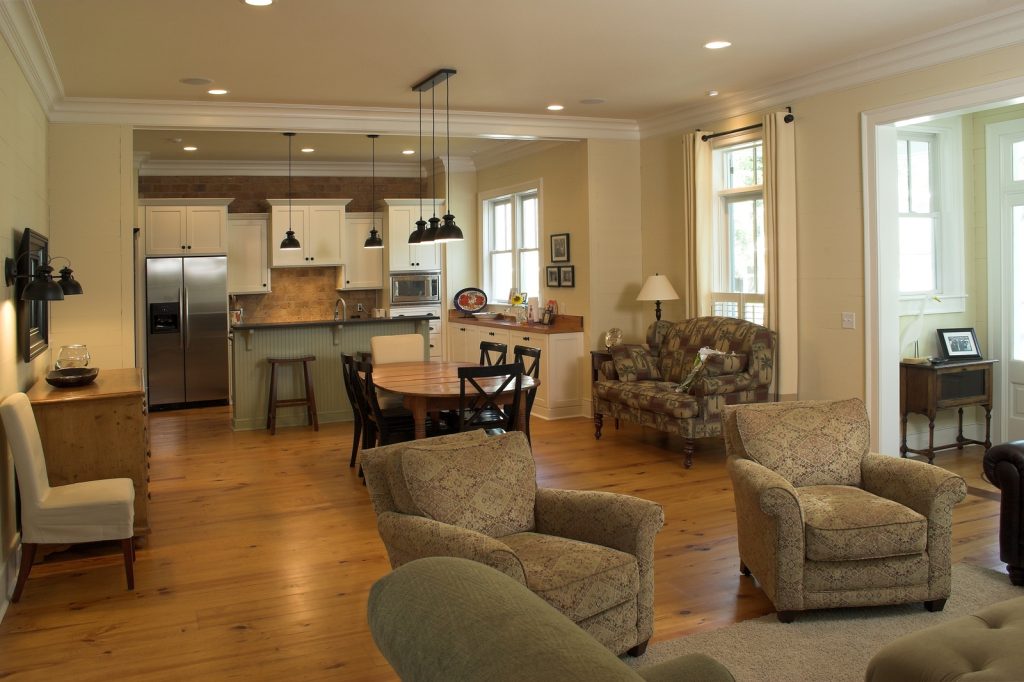 This open concept floor plan of living room, sitting area, dining area, and kitchen allow for a continuous flow but may present navigation issues – especially for those unfamiliar with the space.

Some people would argue that the current trend of open floor plans, or the open concept as it also is known, is beneficial for many people, if not the population in general. They certainly are popular and are included in many styles of homes. Typically this open style incorporates the kitchen, dining or eating area, living room, and family room, if not more, into one open space without any connecting or dividing walls. Often, the space opens onto a patio area.

A variation of this existed earlier with what was termed the open plan, where walls separated such internal functional spaces (“rooms”), but there were no doors used to create total separation. This should be regarded as more of an open-door concept rather than an open floorplan concept.

Still, there are admirers of this design initiative and detractors. Those who favor it seem to like the fact that the room is totally open and can be arranged according to the individual taste and desires of the occupants – placing furnishings as they like. There are no rules as to what goes into a space or implied boundaries as to where one space begins and ends.

Area rugs rather than walls

Often, area rugs define the space or separate the home into functional areas. They suggest the overall room sizes. Rather than having walls surrounding a room’s perimeter and defining the interior space of that area, rugs are used to suggest that same space and allow for furniture to be placed around the perimeter on the edge of the rug or away from the rug around the edges. This allows for making the room larger or smaller according to the needs of the person In the home.

When it comes to using the space, many people find that they desire – and even depend upon – seeing physical walls rather than just a blank area. They take their cues for navigation from the walls. They prefer the structure that walls provide to define interior spaces where the living room is defined by 3 or 4 walls rather than by an area rug or a grouping of furniture in an open space. The holds true with the dining area, family room, kitchen, and other space. This means that a person with low vision, one with depth perception issues, or someone just feeling more comfortable with an internal structure to utilize in navigating the interior space walls is going to be far more comfortable in that setting than in an open plan concept.

Open concept and aging in place

Many people feel that the open concept is consistent with modern design strategy that facilitates aging in place. However, look at what aging in place means – that people can remain safe in their living space and find it comfortable, convenient to use, and accessible. Often, the very factors that define an open concept weigh against these effective aging in place considerations.

People suffering from a low vision that is compounded by a visual distraction from too many colors and shapes being present in a large area without the benefit of wall space or other confining shapes to isolate them, those affected by color overload from too many shapes, patterns, and colors in an undefined area, and those easily distracted by the shapes and sizes of furnishings without finding them anchored to a wall area are going to find an open concept less to their liking and less safe to be in and navigate than one that provides the security, safety, and structure of rooms defined by physical walls.

Similarly, people with balance and mobility issues that find it comforting, if not essential, to have walls or furniture to touch, grab, and hold onto as they make their way throughout their home are going to be less sure of themselves without the foundation afforded by at least some walls and furniture that is placed next to or against those walls. Also, they rely upon the visual anchor that walls provide to guide their movements through the living space.

Open plans do facilitate the movement of wheelchairs, walkers, and other assistive devices throughout the home as long as the visual distractions in the form of colors, patterns, and shapes don’t detract from someone’s ability to use and navigate the space well. Rather than making their way through a narrow doorway – even a seemingly wide doorway of more than three feet can seem narrow at times.

Since aging in place modifications are done with the occupants of the homes in mind and not done as any type of overriding mandate, an open plan may work for enhanced navigation for those using assistive devices, but it also may be quite challenging for people with various vision or balance concerns.

As with many aging in place design strategies, it’s going to depend on those living in and using the home to tell us what they want and what works best for them.