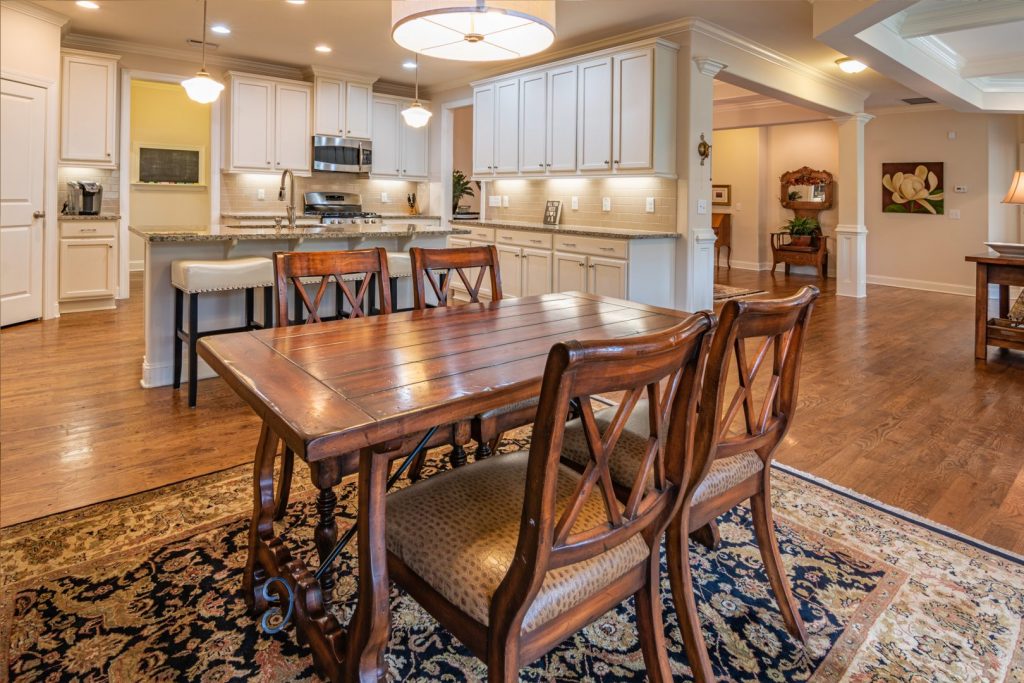 This is an example of an open concept floor plan where the area rug defines the dining area, and the rest of the space flows and is open to access as the occupants desire

Some people would argue that the current trend of having or desiring open floor plans, or the open concept as it also is known, is beneficial for many people, if not the population in general. They certainly are popular and are included in many styles of homes. Typically this open style incorporates the kitchen, dining or eating area, living room, and family room, if not more, into one open space without any connecting or dividing walls – or doorways.

A variation of this existed earlier with what was termed the open plan, where walls separated such internal functional spaces (“rooms”)  but there were no doors used to create total separation – just cased openings. This should be regarded as more of an open door concept rather than an open floorplan concept.

It’s desirable for many reasons

There are many admirers of this type of design initiative, and there are some detractors as well. Those who favor this concept seem to like the fact that the room is totally open and that it can be arranged according to the individual tastes and desires of the occupants. They can place furnishings as they like without any rules as to what goes into a space. There are no implied boundaries as to where one space begins and ends except what the individual experiences might suggest.

Often, area rugs define boundaries by suggesting the overall room sizes rather than having walls surrounding a room perimeter and defining the interior space. Area rugs suggest that same space (roughly) and allow for furniture to be placed around the perimeter on the edge of the rug or away from the rug around the edges making the room larger or smaller according to the needs of the person In the home.

Some limitations of the open plan

When it comes to using the open concept floor space, many people find that they desire seeing walls as reference points rather than just having a blank area that roughly defines room boundaries. They take their cues for navigation from walls.

Some people prefer the structure that walls provide to define interior spaces – where the living room is defined by 3 or 4 walls rather than by an area rug or a grouping of furniture in an open space. The same is true with the dining area, family room, kitchen, and other spaces.

This means that a person with low vision, one with depth perception issues, one easily confused the amount of content in a space of the similarity of colors, or one and just feeling more comfortable with an internal structure to utilize in navigating the interior space walls is going to find such a space easier to use and more desirable than the open-plan concept.

Safety can be a consideration

In the more wide-open concept of continuous furnishings, colors, and activity centers, people may find it more difficult to focus on the area they are attempting to use, to eliminate sounds that are coming from adjacent areas, or to reduce reflections, glare, and movement in adjacent areas from becoming a visual distraction for them. While not a concern for many people, there is a safety risk for those that find the openness disconcerting to them. The additional motion, noise, and shapes from nearby areas within the home may distract or irritate them. There can be a sensory overload that impacts their ability to remain comfortable.

An open floor plan is not necessarily safe or unsafe, but walking into objects, misjudging distances, or being distracted by lighting in adjacent spaces can impact how well someone might use such spaces. They aren’t for everyone.

Just as aging in place designs are done for the specific individual rather than provided on a more generic or template basis, the same seems to be true for the inclusion of the open concept floor plan in homes where it is not requested. Some people desire them, and some find them less helpful or safe.