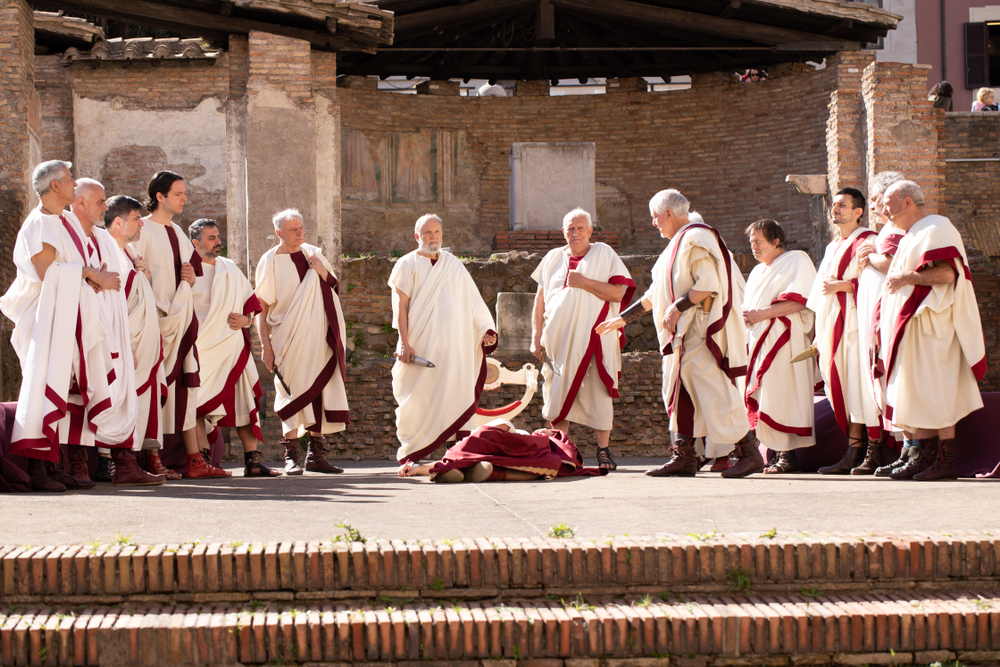 This historical reenactment depicts the events of March 15th – the Ides of March – which we note today.

History tells us that the Ides of March is associated with the assassination of Julius Caesar, but Caesar’s association with the date predates his death. In Caesar’s time, the ides of March previously had marked the beginning of the new year but a couple of years prior to Caesar’s death he had successfully moved the new year to its current place in January and introduced 3 consecutive years of 365 days followed by a 366-day leap year.

The idea of a leap year, which we still have but not always every fourth year, turned out to be problematic, leading to the formulation of the Gregorian calendar to be more consistent with astronomical events and the way our planet actually rotates around the sun.

Until the year 1752, the United States, Canada, and the United Kingdom followed the Julian calendar (as it’s called since it was created by Caesar) before mostly switching to the Gregorian one – also known as the Western or Christian calendar. Today this is the most widely used calendar throughout the world although its phase in and adoption took some 300 years to complete. To finalize the changeover, 11 days were dropped from the Julian calendar.

Implications for aging in place

Just as the Julian calendar evolved and developed from the new year falling on the ides of March (today) to January 1st as we currently observe it, it remained in use for many centuries. even as the Gregorian calendar was replacing it, it took some 350 years for all the nations that we’re going to use it to adopt it.

in other words, it was a work in progress that was changing and developing over time – much the way that we age and that are aging in place solutions for our clients happen as well. we know that the general aging process affects people’s sensory abilities as well as their balance and coordination – notwithstanding other issues they may be facing due to illness or injury.

For whatever reasons, the calendar was changed from today being the first of the year to its current position in January. the parallel with aging in place is that often we examine or observe how people are using their space and getting along within it and suggest appropriate changes for them to remain safer and more effective in their space, regardless of their specific needs.

Additionally, it took many years to understand that the Julian calendar wasn’t working as well for the world’s peoples as desired. this led to the creation of the Gregorian calendar that most of us use today. It was first adopted in France, Italy, Poland, Portugal, and Spain in 1582, with several other nations following soon thereafter.  It was two centuries later in 1752 when the United States made the switch.

This is similar to our aging in place assessments add observations where we look at how people are functioning in their homes and make recommendations or improvements to facilitate their safety, well-being, and navigation within their space, regardless of their specific issues or concerns.

Beware the Ides of March

Many of us likely read the play, Julius Caesar, in high school and are familiar with the line in that work that declares “beware the Ides of March!” – referring to Caesar’s impending assassination. Today, we know that the Ides of March refers to a fundamental change in our calendar.

For whatever reason, since none of us were present in Ceasar’s time nor likely have investigated the matter using whatever resources might be available to document what was happening or why the change was suggested and made, the major timekeeping instrument that we all use and depend upon – the calendar – was reset from the beginning date of the year which would have been today (March 15th) to January 1st.

This is similar to the way we analyze and suggest aging in place improvements for our clients by looking at something that has been allowed to exist, or working in some form for them previously, but no longer viable. While we don’t know why the calendar change was suggested or considered necessary – and maybe there really wasn’t a solid reason for making the change – it nevertheless was implemented.

Similarly, an aging in place suggestion or improvement we offer one individual to assist them in their space may not apply to other households. It could even be questioned by those not familiar with the needs of the induvial for whom we are creating the design.

Today allows us a different perspective on the valuable work we do for our clients.