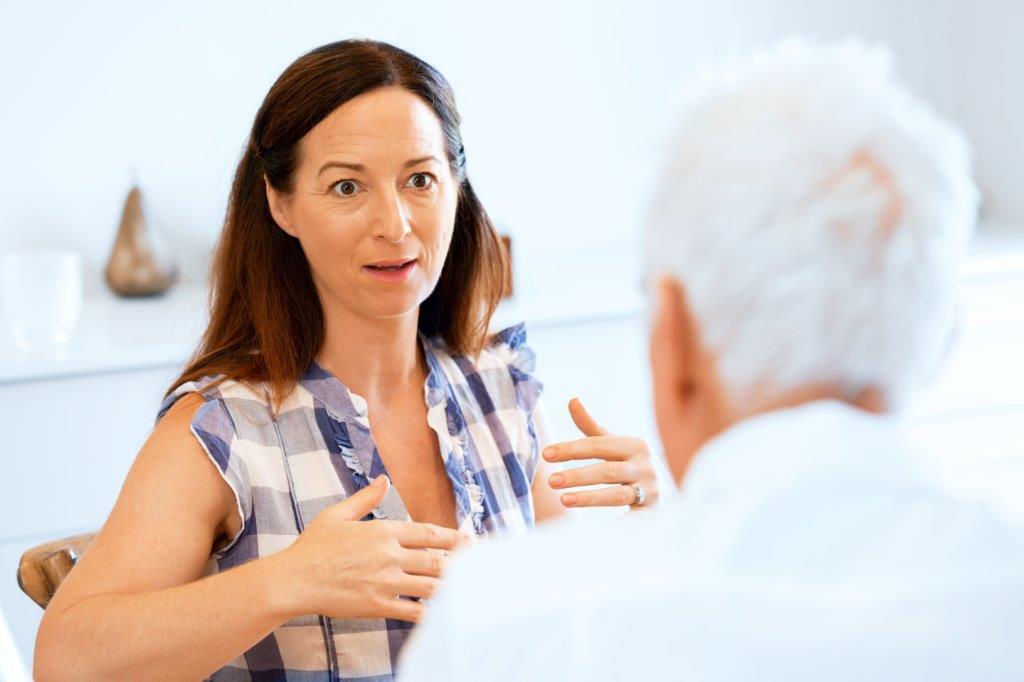 How we talk with our clients and what we say (as well as how they hear us and respond) is a huge part of the overall communication process that will help with their safety and how receptive they are to our suggestions.

We’ve heard before that words matter, but it not always in the way we might think. Obviously, the words that we speak carry meanings, and sometimes those meanings are not as we desired them. People can feel hurt or insulted by something that was said that was not offered that way or not meant to be harmful.

Words are powerful – suggesting opinions or feelings that are even stronger than the actual evidence might convey.

We use words to persuade, argue, and get others to follow our argument and ultimately agree with our viewpoint.

Not what we say but what we convey

It’s not always what we say, but what the other person, and especially an aging in place client, thinks we said or wanted to hear. If we give an answer to any question that is line with what someone is expecting to hear or wants to believe, they will assume that we said it even though we may not have actually voiced it or meant it that way.

For instance, tell a child when they ask if they can do something that your answer is “maybe.” And they will here a yes response. Or tell them “not now” which is not a definite refusal. So, they think that they are still going to get to do what they asked about but just more in the future than they wanted, but this can be as short as a few minutes duration to their way of thinking.

Similarly, we must be careful in how we express our observations to our clients. Often, we are just voicing a passing comment, but the client can take it to heart and assume that we expect them to act based on what we said – or that we will be doing something because of what we uttered.

Being careful how we express our thoughts

This is going to vary a little by the individual and how they interpret what we say as well as how inclined they are to act. If we remark that they still have something (a runner in the hallway, for instance) that we had noticed or commented on previously without a direct suggestion that it be removed or replaced, they might take our comment or observation as a firm command that it needs to be addressed. That may be what we’d like to see happen but not necessarily right now. It’s certainly not what we said and likely not what we meant to imply.

It’s normal in a consulting situation to make several observations. We might tell the client that they should consider (or that they might want to consider) doing something to attend to what catches our attention – moving a large object out of the passageway, repainting a surface, or adding even more light than what we see.

We might also express it in the form of a general question, such as asking them if they have ever thought about addressing something in a certain way or if they are aware of other choices or options available to them. We could ask them other such questions or make general observations during our walkthrough with them, but we have to listen to what we are saying and be aware of how the client might be hearing our remarks.

Certainly, if we mean what we are saying as something we want them to act on, we should be clear about it. We should be equally clear when we are just commenting, observing, or noticing things that could be addressed.

It’s a matter of degree and intent

When we observe what is going on in a client’s home or how they are navigating it, we naturally are going to have some opinions. Some we should keep to ourselves. Some we will want to address in our proposal to them. Some are just going to come out as conversation.

It’s this last part that is the trickiest for us. When we are casually commenting on colors, styles, furniture placement, and other items that we notice that could be something to address in a renovation; however, it may just strike us as something that we would like to focus on later or something that seems a little out-of-place in the overall scheme of things – not necessarily anything requiring immediate attention.

So we need to pay attention to what we are saying and actually listen to our words as they are being spoken. If we think that the client could reasonably construe what we are saying – even though it may be just an observation that was offered as such – as a request that action needs to be taken, we need to clarify our intent.

There will be a few impactful issues that we want the client to address, for their own safety and well-being. There are going to be other, less dramatic issues that have a lesser immediate impact for their home environment.

Lets’s make sure our clients know when we are wanting them to do something and when we are just commenting on what we see. We need to clarify it with them if there is any doubt.