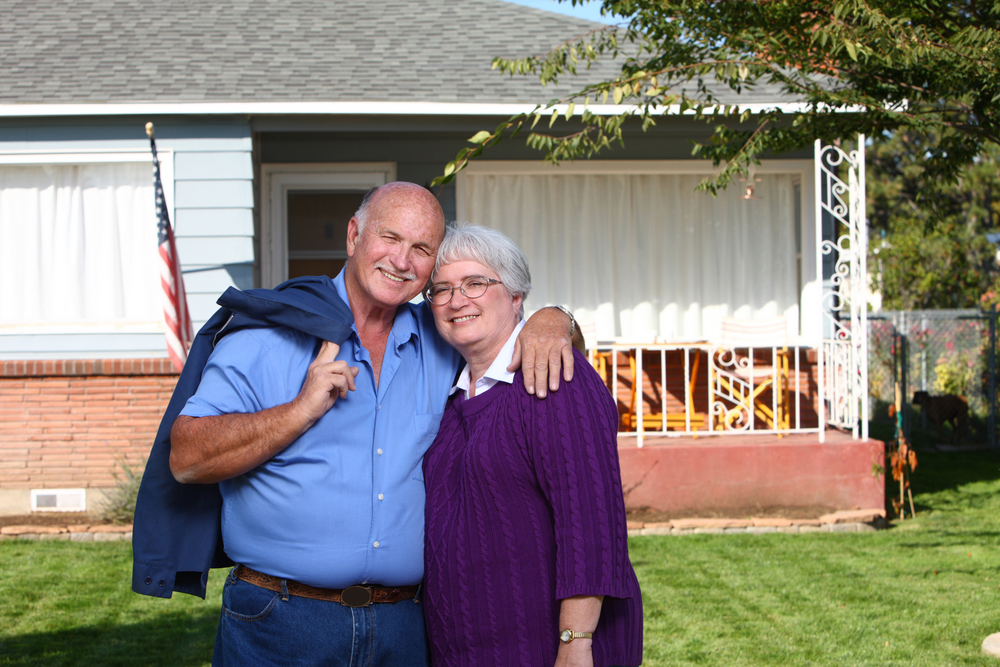 The happy Boomer couple is standing in front of their forever home with the knowledge and comfort that they can remain living here long term and focus on other aspects of enjoying life other than thinking of housing.

For many years, people have been local with no major reason to move. People tended to where they were. There were company towns where people lived near where they worked at a mine or other large local enterprise and rarely had the need to move into a different home. There were more farmers than today, and farmsteads often passed between generations. Decades ago, people generally got a job our of high school or upon returning from military service and remained with that same employer their entire working days. In short, traditionally, there was not a major driving force for people to move or change their residences. They were aging in place.

In many ways we are returning to this idea, and in other ways we haven’t moved that far away from it. While upward mobility and geographic relocation to follow those employment opportunities characterized much of the last part of the twentieth century, the tendency to move from one’s current home has slowed.

Whereas some one-in-five households were moving annually until recently, the trend has been halved to an average of less than one-in-ten. We are staying where we are longer. In fact, a recent study by the NAHB found that the average tenure (length of time someone resided in their home) was over thirteen years – a clear indication of aging in place. Realtors are noting similar findings.

Slowing down and digging in

As Boomers, particularly, have been developing their professional careers, and either remaining in place where they started or having moved to one or more locations to advance their careers and then found a place they wanted to stay, we are seeing people wanting to age in place where they are – no matter how long they have lived at that location.

As Boomers are reaching retirement age (traditionally age 65), they are still going. This certainly is not a time to disrupt their lives with a move. Notice that we refer to the age 65 threshold as traditional retirement age (which it is) and not as a retirement event. Boomers largely are ignoring the conventional retirement scenario and opting to continue working as they have been (if their current employment situation allows it) or to start a new business (or even more than one). People are reinventing themselves with a newfound energy and enthusiasm after leaving the corporate framework.

With the freedom of working from home, conducting Zoom or other online conferences and meetings, and developing their own direction, Boomers are thriving in their new positions. Having the ability to work from home has created a new emphasis on home office design and in lessening the demands on travel.

As such, people don’t need from the comfort of their home, in most cases, to conduct and maintain a thriving business – in place of traditional employment or after that chapter of their lives has ended.

The emphasis on aging in place

If the Baby Boomers had not come along as they did – in their numbers and at their time in history – the major trend toward aging in place, and the emphasis on achieving this, would not be so pronounced. It likely would still be occurring because aging in place has been with us for centuries, It’s just that no one made a big push for it to be a major factor in how we approached our senior years.

Boomers are independent individuals, and they largely have been used to owning their homes. They see no reason for either to change. Therefore moving from those residences into some type of managed care facility, where their customary independence of coming and going and setting their own schedules of activity and the benefits of homeownership both would be relinquished, is not something they anticipate doing.

Boomers have spearheaded the discussion and emphasis on remaining where they are – even before the term aging in place came into prominence. They knew what they wanted, even without a term associated with it. The aging in place discussion is only bringing this topic into sharper focus.

Arguably, without the Boomer market, with its sheer size and behavioral characteristics, aging in place would not be enjoying the popularity and emphasis that we are witnessing.

While Boomers may not need a name to identify what they are doing – aging in place – this is exactly what is occurring. They are defining how we move forward as a society as many retailers, mobility equipment, and remodeling companies are gearing up to serve this expanding market. Aging in place is only going to become more prominent as we move forward.