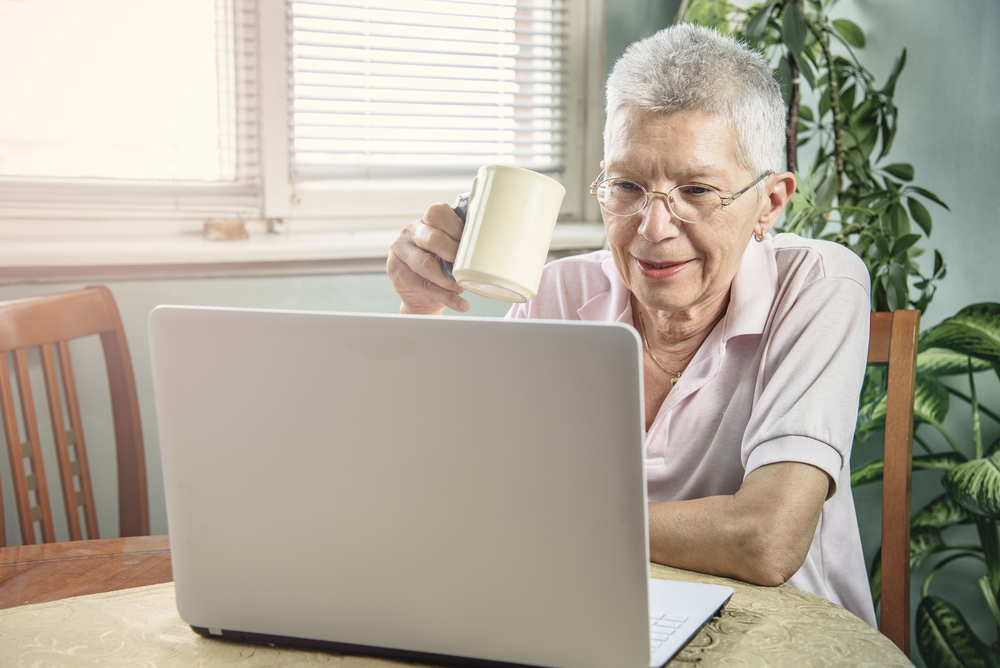 A student attends a CAPS class from her dining room table that is presented in real-time online while she enjoys her coffee and participates in the active discussion, making it simple and hassle-free to do.

While we often discuss something that is called or labeled virtual as if it is real, it actually just describes something that imitates, simulates, or resembles the original. For instance, we can have a virtual experience that may have many similarities to the real event but is not actually it. As an adjective or adverb, if something were to virtually happen, it almost happens. It is close to the real experience but not quite the same thing.

We have taken the word virtual to describe all types of online learning or experiences that involve a recording or something that has already been captured and then projected to us. Take virtual reality (VR) goggles that let us experience something as if we are really there, but clearly, we are not – even when playing games using them. The event is unfolding before our eyes, but we are not physically there.

Yes, there is an aspect of distant or distance learning that can be correctly described as virtual – where we watch a prerecorded, self-paced program as if we are experiencing it live. We aren’t physically present where the class is being presented, and often, the instructor isn’t either, having recorded it at an earlier time for playback on-demand or as scheduled. Therefore, this experience can be described as virtual.

Had we been present or actually been viewing the original material as it was being presented in real-time, it would have been considered a live event.

Virtual is not to be confused with online

We often say that we want to take a virtual class or say that an online class, webinar, or event is being held or attended virtually, but many of us would like the experience to be live or real-time as we are encountering it.

Therefore, such an educational event that is occurring where we are simultaneously present at the event, even though we may be miles away and simply connected by audio and video over the internet, can best be described as online. It’s called online because of the platform or format where it is being hosted, made available, and taught.

Nevertheless, it is a live event that we can watch as it is happening, ask questions, interact with others, and participate in real-time. It’s as if we are in the same room at the same time except that we aren’t.

The CAPS classes continue to be offered as online programs. In 2021, we presented 46 3-day CAPS programs (and others in addition), and some 42 sessions are scheduled for 2022. We want people to be present at the same time as we are and to engage us without either of us needing to travel by plane or car or be stressed when we arrive. The programs are not prerecorded nor canned.

The material is basically the same each time, but it varies as the needs, interests, experiences, and questions of the class participants dictate. Just as people have different needs and requirements as they age in place, people do as well as they take the CAPS classes.